Machines of Loving Grace: The Quest for Common Ground Between Humans and Robots
ecco
2015

As robots are increasingly integrated into modern society—on the battlefield and the road, in business, education, and health—Pulitzer-Prize-winning New York Times science writer John Markoff searches for an answer to one of the most important questions of our age: will these machines help us, or will they replace us?

I’m proud to present this special interview with Markoff, and the conversation focuses on the trends of IT industry and technologies 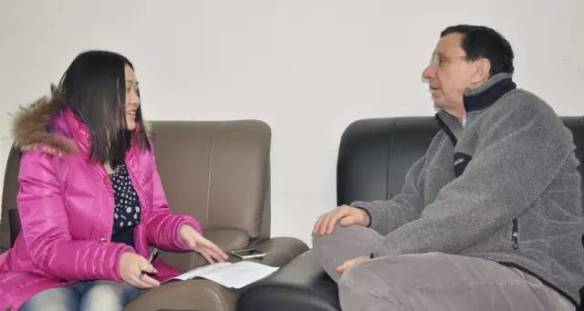 Mr Markoff during my interview

Born in Oakland, California on October 29, 1949, John Markoff grew up in Palo Alto, California and graduated from Whitman College, Walla Walla, Washington, in 1971. He attended graduate school at the University of Oregon and received a master’s degree in sociology in 1976. Markoff has written about technology and science since 1977. He covered technology and the defense industry for the Pacific News Service in San Francisco from 1977 to 1981; he was a reporter at Infoworld from 1981 to 1983. Diving more into technology writing, he became the West Coast editor for Byte Magazine from 1984 to 1985, and wrote a column on personal computers for The San Jose Mercury from 1983 to 1985. From 1985 to 1988, he worked for The San Francisco Examiner. Markoff joined The New York Times in March 1988 as a reporter for the business section. He has also been a lecturer at the University of California at Berkeley School of Journalism, and an adjunct faculty member of the Stanford Graduate Program on Journalism. The Times nominated Markoff for a Pulitzer Prize in 1995, 1998, and 2000, while The San Francisco Examiner nominated him for a Pulitzer in 1987. In 2005, Markoff received the Loeb Award for business journalism with a group of Times reporters. 2007 was a big year for Markoff. In addition to sharing the Society of American Business Editors and Writers Breaking News award, he became a member of the International Media Council at the World Economic Forum, and was also named as a fellow of the Society of Professional Journalists, the organization’s highest honor. In June of 2010 The New York Times presented him with the Nathaniel Nash Award, which is given annually for foreign and business reporting. In 2013 he was awarded a Pulitzer Prize in explanatory reporting as part of a New York Times project on labor and automation. Now, Markoff is married and lives in San Francisco now. At the same time, he also writes for the science section for The Times from Bay Area.

Here, I am proud to present this special interview with Markoff, and the conversation focuses on the trends of IT industry and technologies.

You grew up in Silicon Valley and lived in a house near Larry Page and Steve Jobs, witnessing the rise of Silicon Valley, and you have written about technology for decades. During these years, which breakthrough do you consider as the most important one in technological history?

Markoff: For my whole career, I think it’s probably the microprocessor chip at the very beginning. It’s a question of scale and the evolution of microprocessor chip. At certain point they can put all the basic components of a computer on a single piece of silicon. That really created a cost change that created a technical revolution that lead to personal computing. In my history, I think that has been the most significant thing. It has got more and more powerful and less and less expensive, just driving itself out to society.

For the past decades, the computer development is always follow Moore’s Law, but it seems to come to an end. How do you think?

Markoff: First of all, people have predicted the death of Moore’s Law for many times, including me. We are getting to a point where Moore’s Law seems to be slowing down. It’s really interesting. It hasn’t stopped, but for most of the industry in the last two or three years, the cost of per transistor stopped falling. That’s very significant because it’s about exponential. Things get faster and faster, cheaper faster. And the cheaper faster is what has driven the technology out into consumer applications. You turn the crank; you go from laptop, to tablet, to smart phones. If you can’t get for free, it doesn’t mean the progress stops, but it means you weigh on human innovation. So that’s kind of exciting in a way, because there will be breakthroughs, but they won’t come for free.

At the end, it will have less impact on society. For example, people like Ray Kurzweil have argued that you are gonna basically get a continuous explosion of technology. And I actually think it’s more episodic. There are these rapid advances and plateau that require another technical breakthrough, maybe quantum computing. I watched very carefully, but workable quantum computers are still long way away. There’s a debate. There’s a Canadian company that claims to have a usable quantum computer called D-Wave. I follow the debate and I decide not to write about D-Wave until there are refereed papers in Science or someplace like that, because I don’t entirely trust them. D-Wave is a quantum computing company, based in Burnaby, British Columbia, Canada

As a reporter, you seem to have an uncanny snack to sniff out the most important technical trends and directions, evidenced in your earlier reporting of the internet, the Google self-driving cars, etc. Is there a methodology you could share with us reporters — or even more broadly as interested citizens — how to develop a sensitivity that would capture the pulse of technology?

Markoff: First of all, I can’t tell how many stories I felt like I’ve missed. Like, let me give you a good example. I was actually in the Google Garage, right after they moved to the garage and I didn’t write about it. And I still irritated by that. And the reason I didn’t write about it was there were six different search engines then. Maybe there were more than six. I had no idea which one was gonna be the successful one and I was too lazy. So it really irritates me. I knew these guys when they just starting out. It would look really good if I wrote about them. So I think part of it was timing in my case. I grew up with a generation of computer designers, ended up having a big impact on the world. In a sense, I was really lucky in terms of a technology writer. I spent a year at Byte Magazine in the early 1980s and Byte was sort of the technical hobbyist magazine. That was my familiar witch’s degree that allow me to go very deep in my technical reporting and learn things about architecture. I think that was my advantage. I never got a computer science degree, but by reporting at Byte, I was able to get a technical advantage over other reporters. I was always more interested in the designers, so I spent my time literally hanging out with the guys who were doing the designs. They were my age. I came of an age as a reporter at the time the Homebrew Computer Club. It was a very exciting time. It was more actually about hobbyist culture than it was about industry. I mean, the personal computer first came out like a fantasy amplifier. There was a whole group of young people just wanted get their hands on this computer. They didn’t even know what they wanted to do with it. It just seemed like the most exciting thing around. I was covering that. So it’s timing more than anything else.

Right now is it a good time for us?

Markoff: There’s probably a group of twenty years old out there doing the next. If I can start over, for example, I would focus on CRISPR. It was simultaneously invented in MIT and Berkeley. But I think CRISPR is gonna transform the world as early microprocessor did, for good or for ill. I just don’t have the background of biological science, which is frustrating to me. I’ve done some reports in gene sequencing, and I walked into those stories. You know I can walk into any IT situation, and ask intelligent questions. But when I walk into the biological labs, I got very nerves, because I don’t have the grounding. It’s frustrating.

Markoff: What’s happening in America in the last ten years is this explosion of news organizations mostly on line. They cover technology. So there’s a wealth of reporting. So quantity is not the problem. But it’s uneven of the quality of the reporting. A lot of them focus on sort of business and consumer stuff and it’s not focusing on technical detail. The art form is a good explanatory reporting on science and technology and I try as hard as I can. It’s essential that, the society needs journalists actually watch these things and explain them. And I’m not too pessimistic that I think there’s such a vastly covered everything that sending to me how much has changed in the last decade.

I expect to see a lot of sensationalism. AI is been so much covered by Hollywood. They are intense to shape our view of what machines do, and causes us basically our expectations are too high, largely because of the Hollywood movies. So I think one of the best things journalists could do is give us a real view of exactly the technology is.

To be continue. In the part 2, Markoff will discuss more on the AI and IA.